I read the first book in this series, The Wrong Kind of Love, and was really impressed by this writer. I don’t know how I missed the second book (like I said in the release day blitz), but I was excited when I heard about the third book. Today I am sharing my review of Dirty Reckless Love. Make sure to read until the end for a small excerpt.

Six weeks ago, paramedics found me unconscious in my own home. Beaten. Bruised. Hardly breathing. When I woke up, I couldn’t remember the last three years or anything about my life in Jackson Harbor. They tell me my fiancé, Colton McKinley, is on the run for what he did to me. They tell me I’m safer if I stay away.

I don’t care if my memories ever come back. I want nothing to do with those missing years . . . until a sexy stranger with angry eyes shows up on my doorstep and demands I stop ignoring him.

Levi Jackson is my fiancé’s best friend, but seeing him sparks something inside me. As the truth unravels in my mind, I know they’re wrong about Colton. My own secrets are far more dangerous than the man I was engaged to.

I return to Jackson Harbor to search for answers and find myself running from a faceless boogeyman and seeking refuge in Levi’s arms. And in his bed.

I can’t deny my feelings for Levi. But as the pile of lies between us grows, I realize that sometimes the truth can’t set us free. It may be the very thing that could destroy us.

Levi instantly felt a connection with Ellie, but that was before he found out she was his best friend’s girl. Fast forward a few years and Ellie doesn’t remember much about the past three years. Ellie was attacked, but isn’t sure by who. Everybody thinks it was Colton, her boyfriend, but she just doesn’t know. Ellie remembers nothing about her life in town.

I wasn’t sure how this book would go seeing how Ellie didn’t remember much. The author was smart by choosing by writing the book in the past and present. I was able to really understand more of how things went down. And because of the book being told from both Ellie and Levi’s POV I got the whole story.

From the start I was really hoping that Ellie would end up with Levi. I loved his character from the start. Even though he seemed like a toufh guy and maybe a bit macho, he was actually really sweet and protective of the people he loves. Ellie isn’t sure what to believe in the beginning, but it’s clear she feels a connection. A hint that she could feel safe. After losing as much as she did, it must have been hard.

During the story, I never really guessed who was behind her attack. The suspects were a bit too obvious, so I knew I was missing something. It says a lot when an author has me guessing and I don’t know who did it halfway through the book. I am very satisfied with how this book ended.

While I loved the characters, love story and mystery in this book, it felt like something was missing. I think because it’s told between the past and the present, and Ellie’s memory loss, the romance wasn’t as strong. I didn’t really swoon in this book and that is something I like in a romance book. I would’ve liked more about Colton and Ellie and Levi and Ellie. I think that was put a bit in the background because of the mystery.

What I love with series like this though, is that we see characters from previous books. I hate saying goodbye to characters I love, so it’s nice when we get a glimpse of their future.

The man searches my face. “That’s why you won’t come home. You’re afraid of Colton.”

“I don’t want anything to do with that life.”

He exhales heavily and rolls his shoulders back, as if he’s trying to shake off a ghost. “That’s not fair to the rest of us. To everyone who loves you, everyone who was sick with worry when they put you into that coma. Not. Fucking. Fair.”

I shrug. “Maybe losing a child and almost dying has made me a little selfish.”

His gaze drifts down to my stomach, and I cover it with my hand without thinking. “I’m sorry about the baby.”

I nod, tears springing to my eyes. “Me too.” So sorry.

“I understand if you want to live here now, but don’t cut us out. We all lost something that night.”

He narrows his eyes. “You think I didn’t care? That this was all some game to me, and losing you was nothing?”

I wrap my arms around my chest, as if the pressure might weaken this force pulling me toward him by the solar plexus, this inexplicable need to be closer and let him wrap me in his arms. “Losing me? When was I ever yours to lose?”

He jerks his gaze away from me, slides off his stool, and downs the rest of his beer. “Thanks. I guess that clears up where we stand after everything.”

I open my mouth to apologize but swallow the words and meet his steady gaze.

Then he backs away and grabs his bags off the bar. He pulls an envelope from his pocket and hands it to me. “I was going to leave this for you with the barista next door, but I guess I can save myself the trouble.”

“What is it?” I ask, staring at the crisp black calligraphy that reads Ellie Courdrey.

“An invitation to Ava and Jake’s wedding. Despite what you seem to think of me, I’m not fucking my future sister-in-law.”

He nods. “They thought about canceling after everything, but . . .” He stares at me for a long beat. “They decided to put love first.”

“Maybe it’s not always about what you want.” He shrugs as if it’s no different to him either way, but I can tell by the tension in his shoulders that it matters a lot.

He steps forward—too close—and I let him, closing my eyes at his scent. Then a flash.

He’s over me. The weight of him presses into my hips, his calloused hands holding my face, his fingers in my hair. “You’re sure?”

I nod. Slide my hands down his back and lift my hips. “Yes. Please.”

He searches my eyes. “No regrets.”

I hold on to the memory of this man, wanting to examine it, to figure out what it means, but I’m too distracted by his closeness in this moment. He’s big. Strong. Warm. 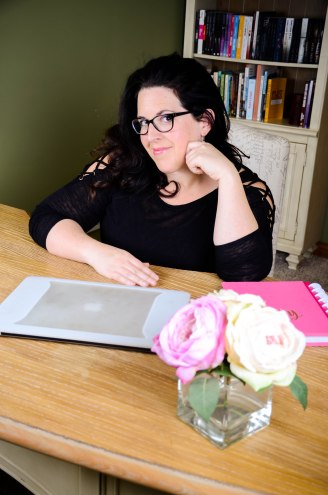 Lexi Ryan is the New York Times and USA Today bestselling author of emotional romance that sizzles. Lexi is the 2018 winner of the Romance Writers of America® RITA® award for Best Long Contemporary Romance. She considers herself the luckiest girl around to make a living through storytelling. She loves spending time with her crazy kids, weightlifting, ice cream, swoony heroes, and vodka martinis.

Lexi lives in Indiana with her husband, two children, and a spoiled dog. You can find her at her website: www.lexiryan.com

All in all, I did really enjoy this book. I hope to get the second book in the near future and catch up with that. Have you read anything by Lexi Ryan? What is your favorite book by her?