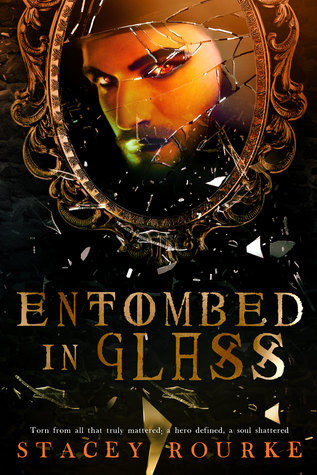 Mirror, mirror on the wall.
What’s behind that fated call?
He’s the seer of present, future, and past,
Yet remains a nameless face entombed in glass.

Raised as a servant in the underwater kingdom of Atlantica, Alastor worked his way up to a regal member of the Royal Guard. Only as a decorated soldier did he stand a chance of winning the hand of the woman he’s loved since childhood … Poseidon’s only daughter, Princess Vanessa. But, when the war against humans rages, dark magics are evoked to give the mermen a fighting chance. Temporarily granted legs, they charge from the sea into a doomed battle.

Doing the bidding of his masters as a trusted pawn,
The claims of his loyalty couldn’t be more wrong.

Waking on land, with bodies all around, Alastor’s lone goal becomes returning to the ocean and the only life he’s ever known. A plan that is quickly diverted when Hades, Lord of the Underworld, appears with a twisted agenda all his own. Cast to a land far from the lapping comforts of home, Alastor’s sole companion is a troubled misfit named Sterling that soon comes to depend on him. Trained to be a hero, how far is Alastor willing to go to return to the woman he loves? And can he live with the sacrifices he’s forced to make?

Each day he schemes to break free from their thrall,
and honor a self-made vow … to kill them all.

Goodreads: https://www.goodreads.com/book/show/38095618-entombed-in-glass
Purchase:
Amazon: https://www.amazon.com/dp/B079KXT95P
Review
Cover I like this cover more than the cover from Rise of the Sea Witch. I love the colors of this one and how mysterious it looks. The cover would definitely draw me to the book if I didn’t know what it was about!
Plot After reading Rise of the Sea Witch, I couldn’t wait to start this book. While I really enjoyed Entombed in Glass, I was sad we didn’t get any glimpse of what happened after Vanessa’s transformation. Near the end we get some idea of one thing she’s done since then, but not a lot. I love Alastor though and was happy that he got a story. Again Stacey Rourke did a great job with retellings, I saw glimpses of Alice in Wonderland, Peter Pan and of course we read about Hades and Persephone. Even a few hints of Snow White. This book is quite an adventure. We are on the journey to find the mirror and encounter quite some interesting characters along the way and interesting worlds. This book definitely has some funny moments, but also many touching moments. There are a few plot twists near the end that I didn’t see coming and I have to say I love Alastor for how brave and selfless he is. Stacey Rourke left me wanting more of this world. I was happy to read at the end that there will be more! Hopefully we get more of Vanessa again as well!
Characters Alastor is still a character who is fighting his way back to Vanessa. He makes a deal with Hades knowing it’s his only way back to her. Doing this of course makes his life more complicated, but he takes it as it comes. The only weird thing about him, is living under water his whole life, he adjusted to the world awfully fast. At the beginning he didn’t even know what he could eat or drink and after that he seemed to manage without help at all. That was the only odd thing I encountered. He’s a character who fights for what’s right even if it means he sacrifices his own happiness.
Sterling is definitely like the Mad Hatter, but you just feel bad for him. It’s clear things aren’t completely right and he is confused at times. All he wants is his Alice though. In the end he starts learning to trust and it’s beautiful to see. I think Sterling was my favorite character in this book.
Phin was a sweet boy who was open to a new adcenture. Even though he was young, trusting Alastor wasn’t an issue and he experienced things he never would have otherwise. Phin is very brave and I hope we get to see more of him in the next book.

AUTHOR BIO:
RONE Award Winner for Best YA Paranormal Work of 2012 for Embrace, a Gryphon Series Novel
Young Adult and Teen Reader voted Author of the Year 2012
Turning Pages Magazine Winner for Best YA book of 2013 & Best Teen Book of 2013
Readers’ Favorite Silver Medal Winner for Crane 2015Stacey Rourke is the author of the award winning YA Gryphon Series, the chillingly suspenseful Legends Saga, and the romantic comedy Reel Romance Series. She lives in Michigan with her husband, two beautiful daughters, and two giant dogs. She loves to travel, has an unhealthy shoe addiction, and considers herself blessed to make a career out of talking to the imaginary people that live in her head.

If you want to follow the rest of the tour click here. The links are updated daily, so you can see all of the posts about this wonderful book.
Once again I want to thank Xpresson book tours and the author for the opportunity to spread the word about this wonderful book. While I liked Rise of the Sea Witch better, this was still a fun read. I will definitely read the new books in this series in the future. This author has a fun way of retelling well known fairy tales.