Last year I read Scarlet Toys, the first book in the Violent Circle series. On February 27th the second book came out and I read and reviewed it. I was really curious to see if it would live up to the first book which I really loved. 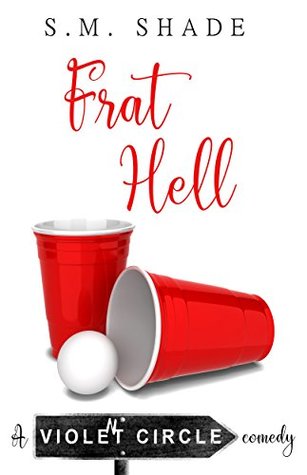 It’s just as simple and to the point as the cover of Scarlet Toys was. I love it. I’d say the cups and ping pong ball fit the description of Frat Hell, haha. When I was reading this, I answered a currently reading question and someone asked if this was a horror book. If it didn’t say comedy on the cover, I would’ve completely understood that, haha.

“”I have a girlfriend,” Noble tells him with a goofy smile. He sounds like a twelve year old boasting to his friends.”

I read Scarlet Toys last year and was curious to see if this book could live up to that one. While Frat Hell is different in many ways, it’s still just as good! There is still a ton of humor, some romance and moments that leave a smile on your face. Violent Circle is still just as crazy as it was when we read Cassidy’s story and that gives us some fun moments. Jani doesn’t really like Noble in the beginning, she thinks he’s just a typical frat boy and doesn’t want anything to do with him. Noble doesn’t give up though and he really proves to her that he’s not like them. He’s actually pretty serious and wants to make something of himself. I love how they go back and forth before he actually convinces her. Between getting trapped in an old asylum building, being completely red after a science experiment gone wrong and gay porn during a house inspection, I think it’s say this book is ful of crazy moments. This book was even more fun, because we got more of Cassidy and Wyatt. I loved there story, so I was happy to read about them a little bit more. This was a fast and fun read and I was sad when it was over. I really hope we get a lot more of Violent Circle.

“Love in real life may be a myth, but my book boyfriends never let me down.”

January or ‘Jani’ likes the way her life is at the moment. She likes her job at Scarlet Toys, loves her mother who she takes care of and gets by. She doesn’t think love is in the cards for her, all she knows is that she doesn’t want to end up wanting someone that doesn’t want her. This happene to her mother and she will make sure it doesn’t happen to her. Jani would like to take some business classes in the future, but needs to save first. Noble has been bugging her to date for awhile and she never expects to actually fall for him. This opens a lot for her and life goes differently than expected. I think Jani really opens up in this book and really starts thinking about what she wants. Jani can be funny, but also serious when necessary.

“His Santa suit is far from traditional. I don’t think I’ve ever seen a Santa in bright red spandex shorts, connected to white suspenders that stretch over his bare, well- built chest. His shiny black boots complete the outfit.”

Noble knows what it’s like to have to work for stuff that he needs. Even though he is a frat boy, he works hard at school and is thrilled when he knows he can get his masters degree without getting into even more debt than he already is. He’s been working in retail, but he will be happy when that will be over. I work in retail, so I can totally relate to some of his issues, haha. The author described working in detail perfectly! He’s a sensitive guy and really cares about Jani. I think he’s even more surprised than her when they start dating. Even though he seems really confident, he can pretty insecure. During Frat Hell we really see Noble go for what he wants and become more confident.

This book was different than Scarlet Toys, but definitely still amazing. If you like a lot of humor, some romance and loving characters this is the book for you! While it is a part of the Violent Circle series, it can be read as a standalone.