My Lady Jane is a book we have bothx wanted to read for a very long time! We have been talking about it for awhile and finally decided to read it. After hearing so much about it, we were curious to see if it would meet our expectations. 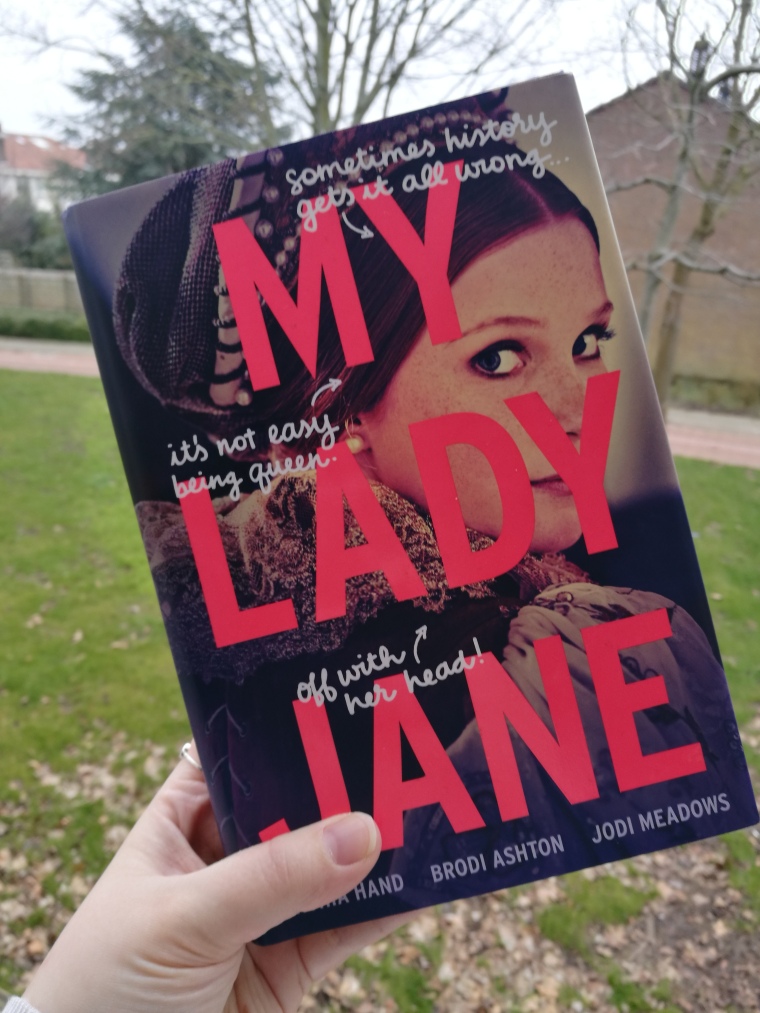 My Lady Jane is the first book in the Lady Janies trilogy. Edward (long live the king) is the King of England. He’s also dying, which is inconvenient, as he’s only sixteen and he’d much rather be planning for his first kiss than considering who will inherit his crown…

Jane (reads too many books) is Edward’s cousin, and far more interested in books than romance. Unfortunately for Jane, Edward has arranged to marry her off to secure the line of succession. And there’s something a little odd about her intended…

Gifford (call him G) is a horse. That is, he’s an Eðian (eth-y-un, for the uninitiated). Every day at dawn he becomes a noble chestnut steed—but then he wakes at dusk with a mouthful of hay. It’s all very undignified.

The plot thickens as Edward, Jane, and G are drawn into a dangerous conspiracy. With the fate of the kingdom at stake, our heroes will have to engage in some conspiring of their own. But can they pull off their plan before it’s off with their heads?

Candyce: I like how this cover looks. I think for once that this lady fits on the cover. After reading this book I get the cover even more. It’s very fitting for Jane. I love the little notes in white pointing to her.

Isabelle: I really like this cover as well! I love the look of it but would’ve liked if her hair was a bit redder. Like Candyce said, those white notes are perfect! They really make the cover in my opinion and I like the lettertype a lot.

“On everyone’s lap rested a book. Any book. In case the wedding got boring.”

Candyce: This book wasn’t exactly what I was expecting, but I LOVED it. This was my first historical fiction and I wasn’t sure of what to expect. Of course, they talk a lot about the history of Jane, but change it completely in quite an interesting way. It’s a mix of history and humor. Edward has been King since he was 8, but is pretty sick and doesn’t know if he will make it. When things turn differently than expected, he makes Jane Queen. She doesn’t know about this and really only wants to sit and read her books, haha. I can totally relate to that. I loved how the topic of arranged marriages was approached and I loved Gifford’s actual secret, haha. Normal history like this can be pretty boring, but these authors were able to make it into their own interesting story. I love the touches of fantasy and humor mixed in. I also want to give these authors a big compliment, because I honestly couldn’t tell three authors wrote this book together. To be honest, I really don’t know much about that time in history, so I’m sure a lot of details have been changed, but it didn’t make me enjoy it any less. I loved the war between the ones that can turn into animals and ones who can’t. It’s basically a version of wars between races, except this one sounds more interesting. I have never really read anything like it, so I was very curious.

Isabelle: This was such a fun read! I heard so many good things about it that I was a bit hestitant, would it be as good and as funny as everyone said? YES IT WAS! I loved that we had people who could turn into animals a lot, it made for a ton of funny moments and interactions. But as Candyce said, it also shows a parallel to wars between races and discrimination so it does have a bit of a serious undertone as well. I don’t really know the story of Jane Grey so I can’t say too much about the accuracy – apart from people turning into animals of course 😉 – but I think the first half of the book follows that story pretty well. The story was a bit predictable but a great plot line isn’t really what this book is about anyways. I enjoyed the story, the characters, and most of all the humor. And I do think that is what this book was about. Candyce already said it, but these authors work together so well. I did not notice which part or chapter or sentence or whatever was written by whom. I’m excited to see what they’ll do in book two.

“Armies aren’t very good about carrying libraries with them. I can’t imagine why. We’d fight so much less if everyone would juste sit down and read”

Candyce: Jane is my favorite of them all. She is a lover of books and I can totally relate to that. In those days that was frowned upon. Women weren’t meant to be the smart ones and change the world. They were supposed to sit there and be pretty. Jane didn’t agree. I think she was very strong. Even though she really didn’t want to get married or be Queen. Jane did her best and fought for what she believed in. She even tried opening her heart for love and at that moment it wasn’t easy. Edward is King, but he never really felt like one. Most things were done for him and he doesn’t realize that until later in the book. This makes him wonder if he really should be King. When you think you’ll be dying in the near future, it makes you think. He was funny and sincere and I wouldn’t mind him as a good friend. I didn’t know what to think of G (Gifford) at first, but I grew to like him. Once we learn more about his past and why he thinks certain ways it’s rather understandable. In the end this is a fun group together and I think they really bond. I’m kind of sad that the second book doesn’t include these characters.

Isabelle: Jane is such a loveable character! She loves books and that is always a plus point for me haha. As Candyce already said, she was quite remarkable for her time and she was very relatable. I loved her interactions with G even though their communication could have been better haha. Edward is kinda boring at the start and is a horrible king. I didn’t really like his chapters at first. He did go through a great transformation though and he ended up making the right decisions. Those were definitely not time-appropriate but they made for a great story. And then last for our main characters is G. I loved his character and totally ship him and Jane (which is lucky since they got married so soon haha). As I said, their communication could have been better and I do think that G is mostly to blame for that, if he was honest about his night-time adventures from the start he and Jane would’ve bonded much sooner and things probably would have been a bit easier. I liked these characters a lot and the side characters were quite loveable as well, at least some of them were haha.

“Because he was English and that’s what the English do under stress: they drink tea.”

It’s safe to say this book really lived up to our expectations! The only positive thing about waiting so long to read this book, is that we don’t have to wait a really long time for the second book to be available. Only a couple or months. Have any of you read My Lady Jane? What did you think?