Not too long ago I read Mother of Shadows. I was given the opportunity to review this book for the author (that is still such an honor) and this book sounded good. I was warned it had a cliffhanger though and the second book just came out. Will I be able to wait to read the second one? 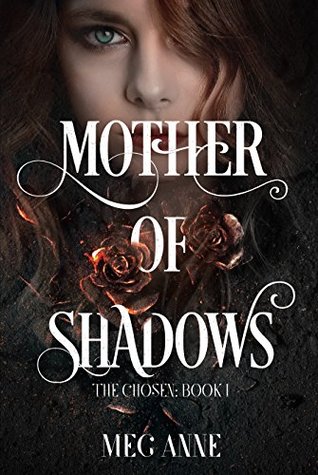 I love the font on this cover, it really jumps out at you. I love the details, like the roses and the brown accents.

I really loved the concept of this story. Helena has always had a quiet life and lives through her family’s friends stories when he stops by. His next visit is more urgent though. Helena, according to prophecies, is the ruler of the Chosen. Before she knows it, she’s taken away from her home and needs to learn to use her magic to pass her trial. Besides that she must find her Mate. When this turns out to be Von, not many are pleased. Due to his past and his people, he’s not their first choice. Except Helena knows for sure he’s her Mate and won’t see it any different. There are other prophecies and when heading back to Von’s home, certain difficulties arise. Not everything is as simple as it seems and there is betrayal from their own.

I think it’s amazing how confident Helena became with certrain things. Yes, her magic could be explosive, but she went after what she thought was right. I like that she could have fun, but really wanted to do what was right by her people. Her Circle and Von’s people were a fun bunch and I hope we get to see more of them in the next book. I’d say this book has a lot of potential for the next ones.

While I loved the concept, there are some things I missed. Helena apparently has trained for her trial, but we barely read anything about that. The same as the trial, for me it didn’t seem complete. Same as the trial, we read about what Helena goes through, but I missed the story behind it. That’s why for me it felt rather fast that the author chose to head to Von’s people so fast. Just forming her circle, Helena still had a lot to do at home. And while I understand the whole idea of a mate, I think there could’ve ben more of a storyline for Darrin. To me it was clear that he really cares for her and would want a chance to see where that would go. I will definitely read the second book, because I do need to find out how this story continues. What is Gillian planning? What happens with Von? How will Helena cope? And will she turn out to be the ruler they expect her to be?

Helena is a rather innocent character. Growing up at the cottage, she never got in to trouble and had a rather normal life. It’s overwhelming for her when she finds out there is so much more to her than she knows. Once she goes through training, her powers are still growing and it’s fun when she’s trying to control them. She’s a lot stronger than she realizes, haha. Helena is also definitely devoted to her mate, so when someone is against Von, her emotions can get the best of her. I’m really interested in how she will continue to grow in the other books.

Von seems like a player and maybe he was. That all changes though once he sees Helena. After that moment, there is no one else but her. Von will do anything he can to protect her and he loves her more than he thought possible. He knows he’s not a liked person here and all he really wants is to help his brother. When he arrived, he never actually expected to find more. Just like with Helena, I can’t wait to see how he changes during the other books.

While I have my doubts about certain things in this book, I am curious enough to want to read the next book. I need to know what happened to Von and what Gillian is up to! I am on the author’s ARC team and just received the second book! Hopefully I will get to it in the near future. When I read it I will definitely post a review!