Not too long ago I posted my review about the book Salt and have finally had time to read the novella about one of the characters. I loved the world this author created and I really wanted some more information about this world. Caught in the Current definitely filled in some gaps! 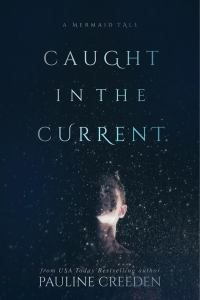 This cover is beautiful. It’s simple yet powerful. I like that you can see the character’s face, but not completely. I love the water effect.

I read Caught in the Current by Pauline Creeden. Reading Bailey’s story also gave me a lot more insight when it comes to Verona’s life. The lack of information about Verona’s life was the main reason I didn’t give Salt five stars. This novella opened up a whole new world to me and I think I understand Verona more now. She is such a sweet person and even though she has done nothing, she takes the blame just so Bailey can keep his position. The only thing important to her is her father and seeing him with dementia can’t be easy. Especially once she is chosen to be exiled that year. I have to say while reading Salt I didn’t really like Bailey. He seemed really pushy and mean. I understand him a lot better now. He feels guilty that she was blamed for something he was involved in and wants to make it up to her. Sometimes he tries a bit too hard. Even though it’s probably not easy going against his family’s wishes. There is definitely something going on with the elders in their world and how the power is divided. I hope we get more information about this later on in other books. Pauline Creeden has definitely created an interesting world!

The only character we really learn a lot about is Bailey. I have to say I didn’t like him in Salt. He seemed rather selfish in only wanting what he wanted and not really thinking of Verona. I understand him a bit more. There community has its rules and he feels the need to follow them even though he thinks they aren’t all fair. He’s afraid to do something, because he doesn’t want to become a bottomfeeder. On the other side, he really wants to protect Verona. I kind of thought it was a bit extreme that he was kind of in love with her all of a sudden. Deciding they should be engaged without talking to her about it.

Verona really just proved again here that she’s not selfish at all and will do anything for someone else. All she really wanted was to take care of her father, even though he didn’t really remember her anymore. She’s also a lot stronger than people expect her to be. I can’t wait for the next book.

This author has an amazing writing style and I’m very curious to see where this story is going to go. I know there are going to be more installments, so I will have to keep an eye out! If you love mermaids this is definitely one to read as well!

0 thoughts on “Review|Caught in the Current – Pauline Creeden”