I love mermaids and I have noticed more and more books are being released about them. So when I saw this book and had the chance to review, I knew I needed to take this chance. Did the author create a unique mermaid story? 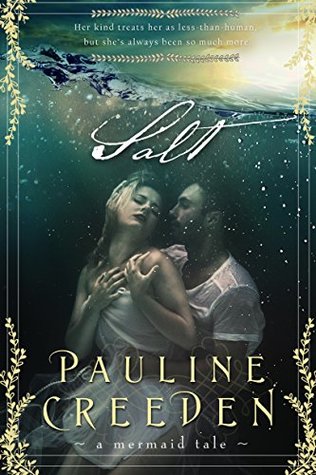 As you all know, I’m not a fan of people on the cover, haha. I do think this cover is appealing though. I love how the water is on this cover with the border around it. And the quote describes this book so well: “Her kind treats her as less than human, but she’s always been so much more.”

I love stories about mermaids, so I was excited to get started. This book didn’t disappoint. We meet Verona and Logan. Logan just moved back to the island with Mama Wend (his grandmother). Ever since he was little and his mother passed away, they have moved all over the place. Seeing how he always moved around he’s never really built a group of friends. When he’s invited to a party on a boat, he has it’s doubts. He knows these kind of kids, but the neighbor kid gets him to go. During the party he realizes he was right and when he does something to help Alex out, he’s left behind in the ocean when a storm starts. This is when Verona comes in. She’s a Mer, but has been keeping an eye out on the human world. She sees Logan get in trouble and helps him. Because this happens her tail dries and she gains her legs. This means she can stay on land and go back to sea at the next full moon. Verona stays with Logan’s family on the island and she finds out there is a lot more going on and that she has more choices than she knew of. This also brings dangers. Logan doesn’t trust her, but can that change?
I have to say I really enjoyed this concept of this book. A different take on mermaids and how their world works. Verona isn’t naive, but she definitely still has a lot to learn about the human world. Watching soap operas with a woman who lives on a boat. She is very curious though.
Logan finds it hard to settle now after he’s been moving around all his life. The only person he is really close to is Mama Wend. She is so sweet! I would want her as a grandmother. During the book Logan tries to build up a life while Verona tries figuring out the human world. This brings them close together and when things get tough they have each other. This makes Verona’s choice harder when she has to decide whether to go back to the ocean or not.
I love how I connected with these characters and how the story developed. I would’ve loved to known more about Verona’s life. We learn some things, but I think a bit more would’ve been nice. I definitely want to see more of these characters.

“Either the girl was a con artist or an alien… and neither option was a good thing.”

Verona isn’t treated well by her own people and this makes her wander around. She’s always been interested in humans and watches TV shows with a woman who lives on a boat (she is hidden of course). She doesn’t even think when Logan needs help and because of that she is stuck on land for a month. This scares her and before she can try and hide she’s taken in by Logan’s grandmother. She is determined to help as much as she can and thinks of leaving so she isn’t a burden. The only problem with this is that the longer she stays, the more attached she gets to Logan and Mama West. It’s a lot of fun seeing her try to figure out the human world. Even walking and eating is something she has to learn. Verona is even more surprised when she finds out that she can actually stay on land. This makes it hard for her. Does she finally return to her people or does she stay with Logan who she thinks she loves? Especially now that Logan really needs her.

Logan hasn’t really had a bad life, but it hasn’t been easy. Losing his parents at such a young age was hard, but he’s always had Mama West. He has a hard time trusting people though and doesn’t really have friends. It’s not for the lack of trying, but just constantly moving makes it hard to keep friendships going. He’s very loyal to his family, so when Verona comes along he doesn’t really trust her. This confuses him, because even though he doesn’t trust her, he clearly has feelings for her. Logan doesn’t really know what he wants in life, but he loves playing his guitar. It makes him happy. I like Logan, because he is really protective of his family and the people he cares about.

Mama West was my favorite character. She’s the grandmother everybody wants. I loved that the whole community was happy to see her return to the island. That the restaurant was busy right away proved that point pretty well I think, haha. Mama West is so loving and would see no person without a home or food and I think it’s so sweet she let Verona in without even knowing anything about her. She’s a feisty lady, haha. The only thing I didn’t like was that Mama West was sick. That was really sad.

While I didn’t like all of the characters on the island, I love the community. I can’t wait to read more about this island and people living on it.

For me this was definitely a unique mermaid story. I loved this author’s style. I have the novella about Bailey (we meet him in Salt). I am hoping to have that review up this month as well! Any other mermaid stories I need to know about?