As you have all read before I am a big fan of sports romances. Ones with hockey are my favorite, so when I saw this cover and description I knew I needed to check this book out. 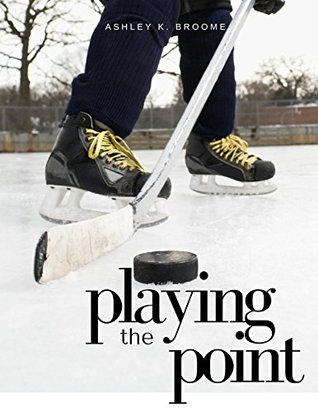 I actually really love this cover. It’s so simple, but attracted my attention right away. It’s nice seeing a cover without a full person on it for once. This leaves more to the imagination and is more unique this way.

This one was a bit different than the typical romance books I normally read. Instead of a romance between a male and female, this one is betwee two men. Henny is a hockey player and trades hockey teams. He goes from the Seattle Thunder to the Dakota Crusaders who are major rivals. Henny is hoping to have a better time here than in Seattle. The reason he left wasn’t exactly fun. Henny is gay and when his team found out it seemed like they were okay with it, until they just weren’t. This made Henny decide while he’s playing hockey no relationships for him, just him and his dog Axel. Hockey is enough for Henny at the moment. While starting out in his new team he’s very careful that no one finds out his “secret”. He doesn’t want a repeat of Seattle. He starts becoming close to the captain of the team, Doherty, and sees him as a best friend. This makes him try even harder to make sure no one knows that he’s gay. The team is like a big family and he really feels like their his family. After Henny’s experience in Seattle this is more than he ever expected. He’s starting to fall for his captain and isn’t sure what to do until Doherty acts upon it as well. As he tries to figure everything out, they are trying to make it to the playoffs and playing against his old team is anything but easy. To be honest I really enjoyed this story, but for me it kind of felt like there was no real story in this story. Of course we read about his journey in the new team and him coming to terms with all that happens. And of course him falling in love. His sexuality threatens to be outed, but that goes in a different direction. This book kind of stopped all of a sudden and I didn’t feel like it was complete. I liked that the romance took awhile to build up and we really got to know the team. I kind of missed Doherty’s POV though. I guess I’m just spoiled with all the books that have dual POVs.

Henny is a nice character. He’s sweet, hard working and knows that he has an amazing chance being able to play the sport of his dreams. Henny is still trying to process what happened on the team in Seattle. Playing on the new team makes him hesitant and not sure how much he can really trust his teammates. He is loyal to his team and is insecure at first about starting anything with the captain of the team or even letting his team know he is gay.

Doherty is a hard working and determined hockey player who really cares for his team and sees them as a family. He becomes friends with Henny pretty fast, but we don’t really see it coming that he feels the same as Henny does. I think it’s hard for us readers to know him more, because there were no chapters from his POV.

The guys on the team are hilarious. Sluts who is Russian and knows all, haha. The guys who make it a habit to sleep with a new woman every night. They’re one dysfunctional family.

I did enjoy reading this book and it had a lot of potentional, but it’s just missing some things I need in a book. Has anyone read good sports romances lately?