Once again I was very lucky to receive an ARC of a book that sounded amazing! Judging Books by Shay Savage is out today. Keep reading to see if this is a must have for your book collection! 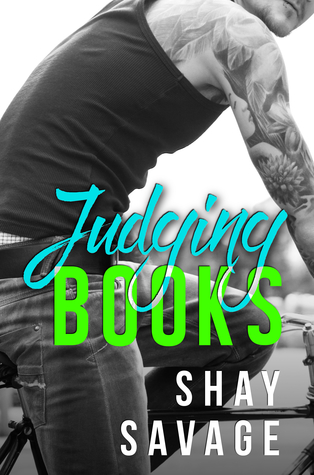 I love that the pitcure is black and white and the title pops out in color. This cover is very tasteful. I like that we only see a part of the man’s face and can imagine the rest of him.

This book was SO amazing! When I read the description of this story it sounded really good. After actually reading it I can say it’s a lot different and so much better than I expected!
Ashlyn grew up very comfortable and has nothing to worry about when it comes to money. She’s almost finished with her Masters Degree and has a job set up at her father’s company. Her interview is just a formality. Ashlyn’s father expects her to take over the company when he retires. In her world everything is judged based on looks, clothes and how much money someone has. This is all she knows. Until she meets Ethan. Ethan is covered in tattoos, piercings and behaves nothing like what is tolerated in her world. He’s also a lot younger than she is and stuff has happened to him and he has some issues. I love how Ashlyn just runs into Ethan and basically judges him right away. He follows her and there is a connection that she doesn’t want to admit is there. He seems like a player, but the longer they talk, the more you realize he is nothing like he seems. Ashlyn has never felt like this for anyone and Ethan is more honest than any guy she has ever known. Can she look past his differences to her ‘perfect’ world and let herself fall in love? The writer knew how to make us fall in love with Ethan and route for him. His story is heartbreaking and you so want him to have everything he wants. It’s something I’ve never read about in a book (I don’t want to say too much, because of spoilers) and this was refreshing. I normally don’t like it when two people meet and instantly fall in love and they live happily ever after. Shay Savage made this connection seem realistic and made me want them to have a happily ever after. I think she gives a great message that you shouldn’t judge a book by its cover. At times I have to say Ashlyn bugged me because of the fact that all she thought about was what her family and friends would think. I understand she grew up like that, but it’s frustrating when a character doesn’t feel confident enough to make her own choices. That is another thing this book had: character growth. Ashlyn changed a lot in this book and in a very good way. She finally started standing up for herself and what she wanted. This was all her family and friends really needed. The only thing that this book was missing, was Ethan’s POV. I would’ve loved to been able to take a look inside his head and how he processed everything. That would’ve given it just a little bit more dimension! Even though I missed that this book still deserves the rating I gave.

Ashlyn is a woman who does want to please her father and the people around her. Even though running her father’s business when he retires, she still agrees, because it’s what is expected of her. She always makes sure to dress right and act the way that’s proper, because once again it’s expected of her. One thing she is doing for herself is finishing her Masters Degree. Even though she already has a job waiting and her grades aren’t very important. It’s what she wants. Something she did all on her own. In this I couldn’t really relate, but in her love of books I definitely could. That I can totally relate to. That’s why Ethan turned her world upside down. He was the total opposite of what she’s used to. I think this was a good thing though. It forced her to really think about what she wants and that sometimes she needs to let herself follow her heart.

“Even with his name, my father would never see past the metal and the ink. My friends would never see anything but the boyish face and the BMX bicycle of the guy seven years my junior. No one would see past the lack of college degree and the numerous friends living in the worst part of town.”

Ethan is only 19, but has been through so much. Being covered in tattoos and piercings and riding around on a bike makes people judge him to be something he’s not. He’s really sweet, caring and wants people he cares about to have everything their heart desires. Unfortunately he knows life can be too short after losing his parents. This makes him realize he really needs to say how he feels and what he thinks when he has the chance. You never know if you have a tomorrow! His accidents made his life a lot harder than it was, so he is forced to do things different ways. Ethan doesn’t want people to feel bad for him, but to just see him for who he is. He has built a life for himself and has a group of friends who are always there for him. Ethan was left a lot of money, but he doesn’t flash it around. He would give it up for someone in need in a heartbeat.

“”I’ve lived a lot in the past few years,” Ethan said. “I think the only mistakes I have made have been when I didn’t tell someone how I felt or didn’t do what I wanted to do when U wanted to do it. You never know what tomorrow’s going to bring, so don’t wait to do or say something important. You only make real mistakes when you refuse to live in the moment. I guess that’s my life motto now.””

Ashlyn’s father isn’t a character I really like or he friend Presley. All they see is the outside and how someone appears to be. The fact that Presley can’t keep her mouth shut and let’s everyone in on Ashlyn’s business just annoyed me. I wouldn’t consider that a true friend. Her father only thinks of what appearances could do to his company and not about his daughter’s feelings. He comes around a bit in the end, but not one of my favorites either.

Ethan’s friends are so sweet. He has connections with a lot of people and they all love him and want to protect him. Even though they are only mentioned and we see them in only a couple of chapters it’s easy to tell that they are very down to earth and only want what Ethan wants.

This book was quite a pleasant surprise and it went by way too fast! I really recommend this book. I have been thinking about it since I finished reading it.