It’s Thursday again, and that means another fun tag for you guys! Todays tag is the You’re Not Good Enough Book Tag. This tag originated from ReadLikeWildfire and Beccathebookreviewer and I was tagged by Kwante. Thank you for the tag Kwante! This was a lot of fun to do. It’s quite simple, you write down 30 character names and draw 2 for each question. Than you choose the character that fits most out of those two and which one isn’t ‘good enough’! Curious to see the questions and my answers? Keep on reading.

1. You only have one more spot on your Spelling B team, who would you pick to complete your team? 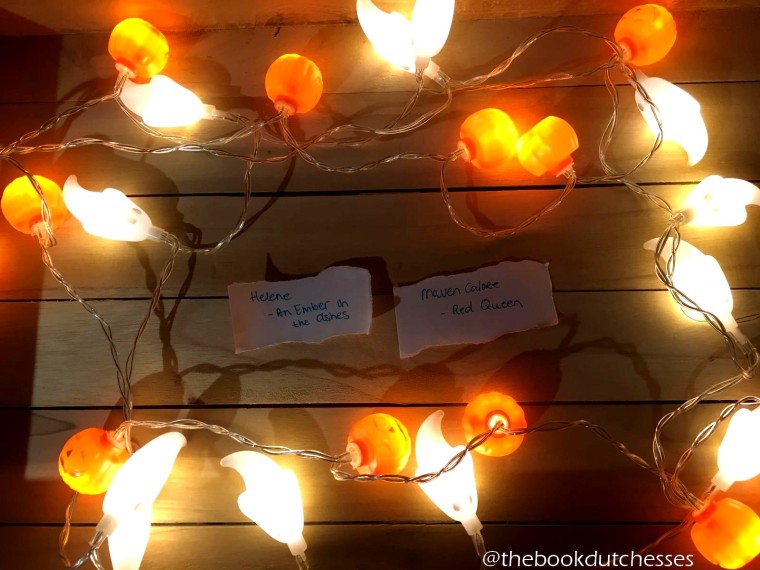 I got Helene from An Ember in the Ashes and Maven Calore from Red Queen for this question and that’s an easy one! Helene is a great warrior but since knowledge was frowned upon in her world I’m not going to bet on her for the spelling bee. Maven however is a prince and I’m expecting him to be a better speller than Helene. He also doesn’t like to lose so I’m liking our chances.

2.Both characters want to kill you, which one would you kill first so you have a better chance of surviving? 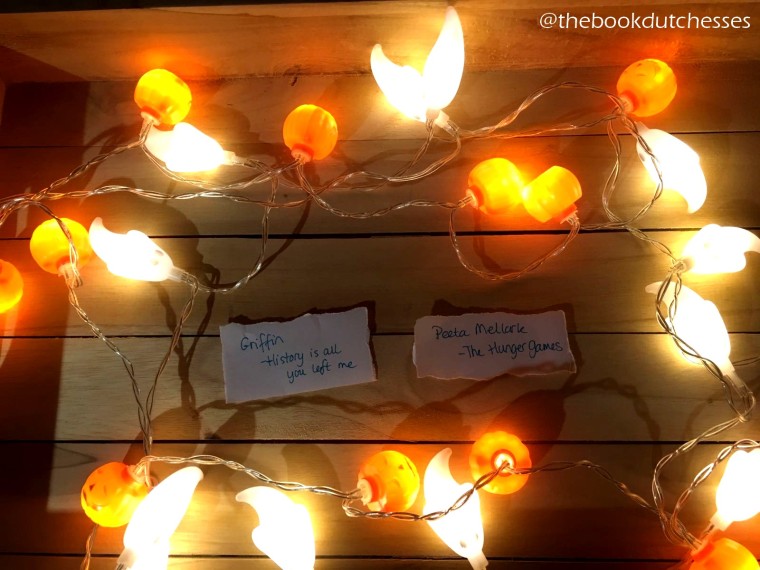 Okay, this is going to make me really sad, but I’m going to kill Peeta Mellark (The Hunger Games) first. I absolutely love Peeta, but he has a ton of experience with these kind of things so I like my chances better when only facing Griffin (History is all you left me). I don’t expect him to be a great fighter.

3. You’re on the bachelor/bachelorette an you’re down to these two characters, which one are you going to give your rose too?

Are you serious right now?! Choosing between Gansey (the Raven Boys) and Peter (To All The Boys I’ve Loved Before) as my boyfriend is near impossible. I absolutely adore both of these characters so much. Peter is one of the reasons TATBILB is my favourite contemporary series, and I’ve loved Gansey from the minute he was introduced in the Raven Boys. This is so so so hard! I’m going to go with Peter because I think Gansey might be a tiny bit too sweet and too good for me.

4. You’re stranded on an island. Which character would you sacrifice to engage in cannibalism?

So, I’m either going to eat Lara Jean (To All The Boys I’ve Loved Before) or Fallon (The Valiant). This is a pretty difficult choice! I really liked both of these characters. Lara Jean was super relatable and Fallon was pretty bad ass after making some dumb decisions. I kind of want to say I’m eating Fallon, I think she’ll have more flesh on her and I’m hoping Lara Jean eats less. But Fallon can fight quite well so I hope I’m not the one ending up on their plates!

5.You’re the next DC/Marvel superhero (with your own tv show of course), who is your sidekick?

So I can have either Dorian Havilliard (Throne of Glass) or Kaz Brekker (Six of Crows) as a sidekick?! I very much love both of these boys. Two of my top Book Boyfriends actually… I have a great idea (if I may say so), Dorian will be my sidekick and then Kaz can be my villain, and there will be an amazing love triangle in this tv show hahahaha. I can already picture this!

6. You’re a manager of an Avocado admiring company, who would you fire for lack of communication skills? 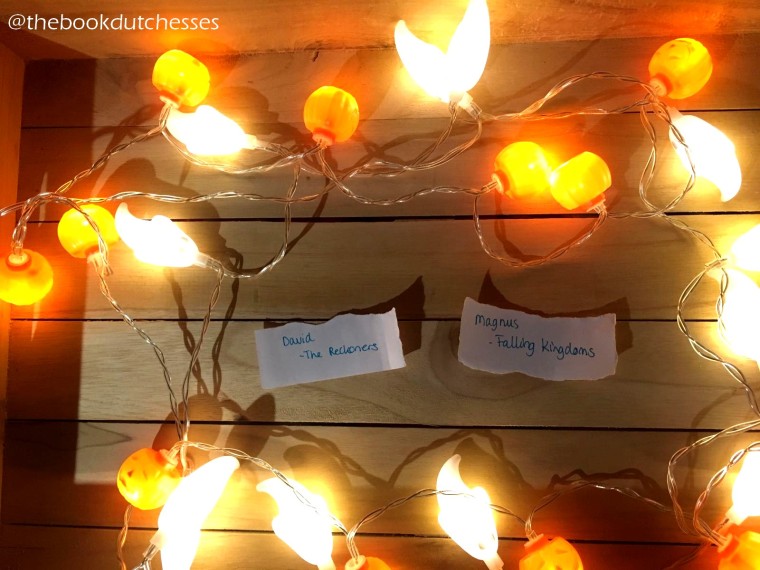 Hahahaha, I love this question! And that’s finally another easy one 🙂 Magnus (Falling Kingdoms) isn’t really the admiring type and  I think he would be horrible for costumer service. David (The Reckoners) however, I feel would be great at this sort of thing. He’ll come up with some ridiculous idea that will somehow work out perfectly!

7. You’ve just finished a book in which your favorite character dies, which character is most likely to comfort you?

Who will be more likely to comfort me? Hermoine Granger (Harry Potter) or Wade (Ready Player One)? I’m going with Hermoine, it was never really said so but I have a feeling she didn’t only read school books, expecially before coming to Hogwarts, so I’m sure she’ll know what I’m going through!

8. Ugh, it’s high school. Who would most likely be part of the popular clique?

HA! Who would be part of the populair clique at high school Caliph Khalid (The Wrath and the Dawn) or Prince Theron (Snow Like Ashes). If we’re being honest, they both would! They’re both royalty, crazy handsome and actually super sweet and caring. I think Theron would be the most populair one, since Khalid has kind of a bad rep/ would be seen as a playboy at high school!

9. The day has arrived; you’re finally a year older! Who would have the nerve to forget your birthday? 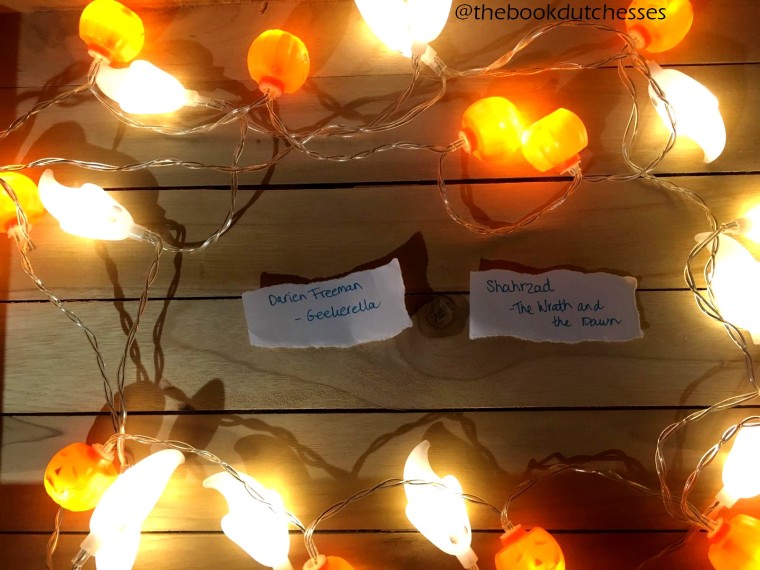 Hmmm, who would forget my birthday? Darien (Geekerella) or Shahrzad (The Wrath and the Dawn). They could both be really busy with orther things, either their acting career or avenging their best friend, but I have a feeling they would both still remember my birthday! I’ll go with Darien since girls are usually better at these things! Not counting myself btw, I’m terrible with birthdays.

10. You’ve just found an upcoming booktube star? Who would it most likely be?

A new booktuber, Julian (Caraval) or Agatha (The School for Good and Evil). While I would think Agatha is more likely to be a bookworm, I’m sure Julian would be better in front of a camera! And he can play a great role so he’d have no problems portraying a booktuber haha. I can see him being super succesful at it!

11. Sleepover time! Unfortunately you can only invite one person, who would you invite?

I wouldn’t mind either of these two ‘boys’ to sleep over at my place! Azriel (A Court of Thorns and Roses) and August Flynn (This Savage Song) are both amazing guys who can both be super dangerous and deadly. If I had to choose I’d probably go for Az, just want to check if he actually does have the biggest wingspan ;)… 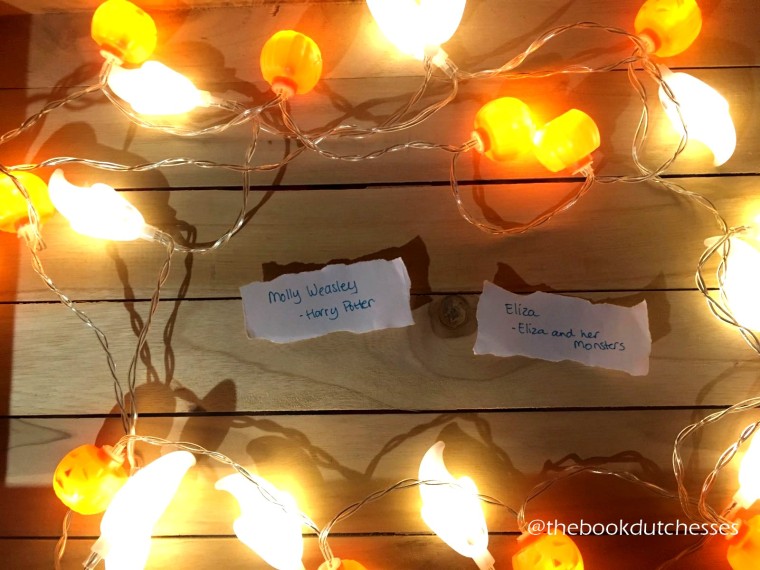 Now that’s pretty dissapointing… So many hotties in there and either Molly Weasley (Harry Potter) or Eliza (Eliza and her monsters) will be my baby mommy. I will go with Molly since she is actually my favourite ficitional mom so she’ll be a great parent to my baby.

13. You’ve just written a super important text. Who would ‘see’ it, but not reply? 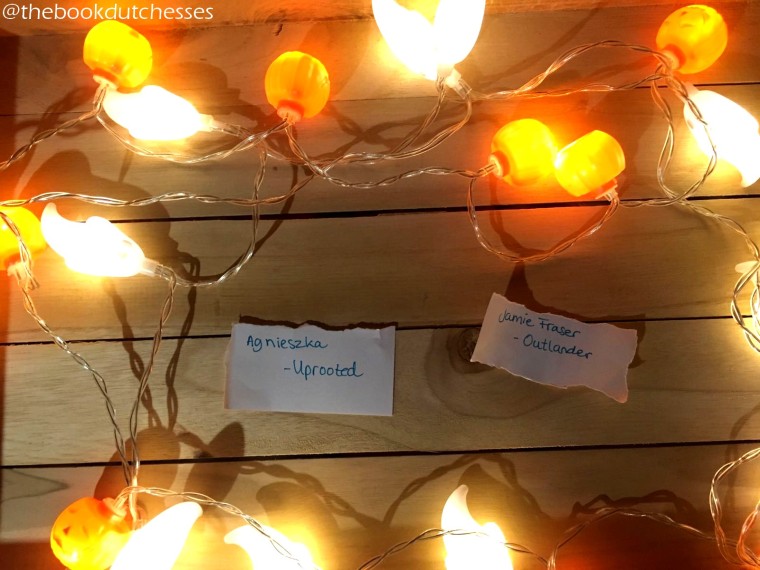 Haha, neither of these characters actually know what a phone is but for the sake of the game we’ll say they do. Agnieszka (Uprooted) and Jamie Fraser (Outlander), who wouldn’t reply after reading the text? Probably Jamie! He’ll be such a guy and will forget to answer the text.

14. You’ve just woken up and it’s time for breakfast. Your mum’s been replaced by..who?!

If only I had Molly here… My mom is replaced by either Vhalla Yarl (Air Awakens) or Delilah Bard (A Darker Shade of Magic). I don’t think Delilah is really a mom figure, so even though she would make sure we’d have crazy adventures, I’m going with Vhalla. Hopefully I’ve inherited some of her magic.

15. You’ve been chosen for the Hunger Games, who would most likely volunteer in your place?

So this was actually supposed to be question 4 but ok. It also works out perfectly now, because no matter how protecting Mor (A Court of Thorns and Roses) is, she’ll never be as protecting as Nemesis (The Diabolic), who after all was created to protect. So I’m sure Nemesis will volunteer at the Hunger Games!

This tag was so much fun to do! I’m tagging Kathryn, Leeniizz, and Michelle. Have fun ladies!