I was given the amazing chance to read an ARC of Fire & Bone and you guys need to read this book! Unfortunately it won’t be released until February 20th 2018, but it’s something you need to put on your wishlist. It is described as a “Gossip Girl meets Perry Jackson in the glitz and grit of L.A.” That really drew me in, to find out more continue reading. 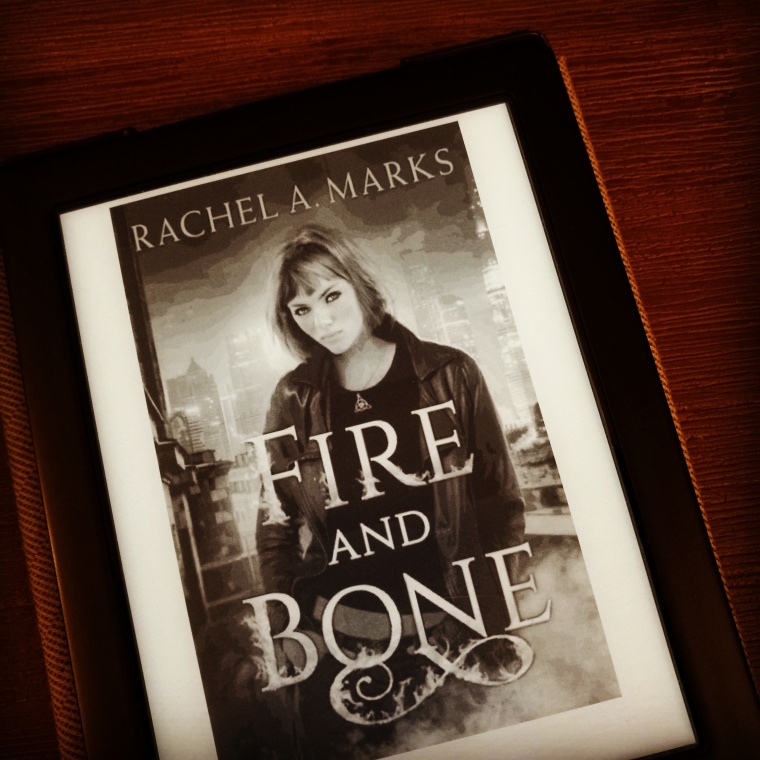 I’m normally not a fan of covers with people on them, but this isn’t a bad cover. I love that you see the buildings in the background and the fire coming out of the letters. It’s black and white on my e-reader, but the colors it has actually go well with the theme of the book.

“I don’t care if she’s some sort of magical freak. She’s a traitor. A liar. And if she comes any closer, I’m going to stab her with one of her red stilettos.”

Sage is a teenage girl that hasn’t had an easy life. Her mother is an addict, so she was put in one foster family after the other. So she spends most of her nights on the streets. Her life changes one night during a party and she is not prepared. Turns out she is a demigoddess, powerful one at that and in a matter of a week or so she needs to decide what House she will belong to and try and control her new found abilities. She is supported by Faelan and Marius and his daughter Lia. The whole new world is very overwhelming and Sage kind of wants to run. Add a dangerous, hot guy to the mix who seems to be able to control her, it gets pretty interesting. Part of the book made it seem like it would be a predictable story, things went a lot different than I expected. That was a pleasant surprise.

“I start to wonder if I’ve really entered a world of gods and goddesses or a live broadcast of TMZ.”

The only reason this book didn’t get 5 stars from me was because the flashbacks in the beginning were a bit confusing at first and it ook awhile for them to be explained. And this book has a kind of love triangle. It wasn’t too present though, so that wasn’t completely a bad thing. All I know is I just finished the first book and I really need more! That ending just really made me want more. I need to know how Sage does with her decision and what that does to Faelan!

Sage is a very vunerable character. She has had to do a lot on her own and doesn’t really trust anybody, which is very understandable. The only reason she goes to the pary that night is for a warm shower and maybe some food. When things turn out differently she doesn’t know what to think or who to believe. In the beginning Sage only tries to find ways to run. Until so many things happen that she decides to fight her battles. And to trust some people. I love how much she grew during this book. How she wanted no help in the beginning, but learned to accept it in the end.

“Why couldn’t my real first kiss have been with a skinny nerd instead of him? How am I ever going to follow that up?”

Faelan, is in this case for me the bookboyfriend, haha. He’s definitely an older character (even though he looks young) and he’s looking forward to his type of retirement after finding Sage and bringing her to Marius. Faelan doesn’t expect to become a protector and to feel what he does. One thing is for sure he fights for who he cares about! His story is quite an emotional one and after learning more about his past I understood him so much more!

“Somewhere in the madness my heart’s become hers.”

Lia started out for me as the ditzy character who only cares about who’s she’s seen with and what she has. I didn’t expect her to be as smart and loyal as she actually is. She shows a different side of herself to the outside world.

“A druid? This girl? I thought druids looked more like Gandalf than Chanel models.”

Kieran, the typical badguy. He seems like he is up to no good during the entire book, but there was a lot more to him than I thought. I can’t wait to see how his character develops in the next book!

All in all I loved this book and I wish I had the second one already! And I feel bad for everyone that you won’t be able to read it until February 2018! Rachel Marks is definitely an author to keep an eye on. Does this book sound interesting to you?