I was recently given the chance to read Meet Me Under the Stars in exchange for an honest review. I am happy that I gave this book a chance. The only thing I wish was that I discovered this author sooner! To read more about this book and what I think, continue reading below. 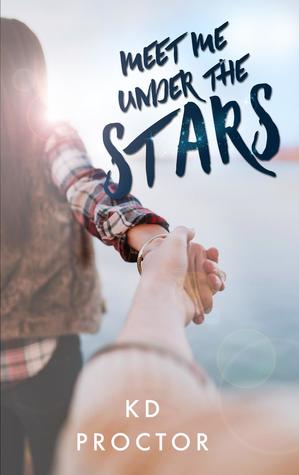 “A lot of people compare love to a puzzle where once two people meet they’re each other’s missing piece. I call bullshit on that. To me, love is more like a mosaic – creating something beautiful while still flawed and imperfect. Just like us.”

The first thing I noticed about this book was the cover. I love it! It reminds me of an account on Instagram I have seen online before of a couple who takes pictures like this when they travel together. I think that is an awesome concept. It created a beautiful book cover as well.

“Nate Walsh knows how to make a girl see stars even when it’s cloudy and overcast.”

Charlie has her own show doing crafts and other things. She is back at her grandparents’ cabin, because her sister has passed away. Nate studied biology and is out doing research when he gets a phonecall from a lawyer. Charlie and Nate used to date and are now being forced to work together, because Gwen, Charlie’s sister, put in her will that she wants them to work together on a charity foundation in her name. Both of them aren’t happy about this. Charlie’s job is up in the air and Nate doesn’t know if he will be able to stay in the states. It’s his worst nightmare to have to go back to England and face his family that don’t approve of what he is doing and kicked him out at 17. They both have other ideas for the scholarship and their relationship ended on a bad note, so this doesn’t go easily. While competing with eachother for the fundraiser, old emotions run high and feelings start to develop. They are all forced to deal with things they don’t want to and figure out if they can live without eachother. I loved how this was all written and I felt every emotion. I don’t agree how Charlie broke up with Nate, but I understand. I love how all of their friends come together to celebrate Gwen’s life at the camp they love. It also shows that everyone deals with grief in their own way. The camp was also amazing. The owners made it seem like one big family and they rememered the group of friends very well and were very supportive in honoring Gwen. It was beautifully written. While this books is pretty emotional, there is a lot of humor in it as well. I laughed out loud many times.

Charlie is a determined woman who temporarily loses her touch after losing both her sister and mother. Let’s face it, that would leave anyone in tiny pieces. And not having the best relationship with her father doesn’t help any. She loves her DIY show, but is kind of out of ideas. When she finds out her job is in trouble she is very determined to find a way to get it back. Charlie has her reasons for breaking up with Nate even though she still loves him. For certain reasons she doesn’t think she should be in a relationship. She tries to deny her feelings as long as possible, but doesn’t realize right away that she is only hurting herself while doing so.

Nate just graduated college and studied biology. He is hoping to set a research record, so that he can use it to help get himself a good job. He is from England and now that college is done, he needs a job to be able to stay in the States. When he finds out he doesn’t have long before his Visa ends he needs to find something fast. So when he gets the notice that Gwen wanted him to help with a charity he doesn’t think he has the time. Until he figures he may be able to use it in his favor. He tries to use Charlie’s feelings to get what he wants. I thought that was wrong, but it’s very understandable after how she ended things with him the first time. It left him a bit bitter when it comes to relationships, so he uses sex with women he doesn’t care for as a way to cope. On the inside he is an amazing and sweet guy though. In the end he lets that shine through and you get to see the good side of Nate.

Other than the two main characters, the group of friends they all had, the camp owners and Gwen’s boyfriend play a part in this story. I think they made a great group together and really cared for one another.

“My mouth goes dry at how good he looks. Like I want to take a photo and blow it up to poster size so I can hang it on my bedroom wall like some lovesick teenager.”

I love romance books and this is one that will be on my favorites list. The fact that the author wrote an amazing story for these characters and how they grew together. It wasn’t just about them getting back together, but also dealing with their own past and feelings. That this happened to bring them together was only a bonus. I hope she writes more books! Have you read this book? What did you think?

“I’d much rather walk over hot coals, buck naked, in the middle of Times Square on New Year’s Eve than attempt the awkward, morning-after conversation.”

0 thoughts on “Review|Meet Me Under the Stars – K.D. Proctor”