Today is my spot on the blog tour of Long Live Dead Reckless. Thanks to Xpresso Book Tours I was able to get a review copy for my review today! If you want to see what I thought of the book and what it’s about, keep reading! 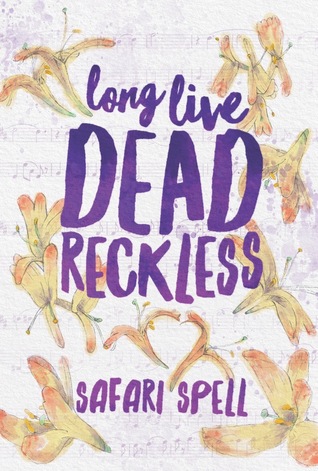 Talor Gardin may be a princess, but her life is no fairy tale.

A year ago, her mother died and her father burned down their house. Now with a father in and out of a mental ward, she’s working a minimum wage job to finish her last semester of college. To make matters worse, she gets itchy every time a guy makes a move on her. The itch could be anything, really: a desire to escape her haunted hometown, a financial windfall, the name of some vampire…or all the above. Whatever the reason, she thinks the answers are written in the freckle constellations of her cute new coworker, Sage Talis.

Sage is the quiet, polite type with plenty of secrets – like fangs and a price on his head – and Talor can’t figure out what makes him so irresistible until she hears him sing. But when cryptic letters appear on her wrist, Talor is thrust into a world where fantastic creatures lurk just below the skin, strangers keep calling her a princess, and everything she’s been through is nothing compared to what’s coming.

Goodreads: https://www.goodreads.com/book/show/34619180-long-live-dead-reckless?ac=1&from_search=true
Purchase:
Amazon: https://www.amazon.com/Long-Live-Reckless-Safari-Spell-ebook/dp/B01I2F441U/
Review
Cover I love this cover. It’s simple, but that’s really nice at times. My favorite color is purple, so that always makes me happy.
Plot I have to say the sypnosis was a bit confusing. It seemed like a contemporary story, but then with vampires and Talor is a princess, but isn’t at the same time. At least not the princess we first think about after hearing that word. This book is pretty long and to be honest, I thought it started off pretty slow. It wasn’t until about the halfway point that it started getting really interesting. Little things happened up to that point, but it didn’t seem like it fit together for awhile. Talor definitely hasn’t had an easy time for awhile. Losing her mother really hurt her and to top it off her father tried burning down their house. It took awhile before her father really played a part in the book. At first when Sage made his secrets known, I kind of got a Twilight vibe from the book. They can’t be together, but they really want to. While I like the love story and paranormal elements, it seemed a bit much at times. I mean vampires, sirens and on top of that they can all transform into animals. I think it would’ve been better to choose and not so much at once. That being said, I did like Sage’s band. They were funny in their own way and very protective. The ending kind of confused me a bit. I expected a few things to happen, but didn’t understand it all. It ended in a major cliffhanger. I do want to read the next book to see where it goes from here. Also, some things that we read about in the book feel like they should be explained more: the crop circles, Spencer (what is his story), her grandmother’s past. We also don’t really see much of her father. I hope that this will be fixed in the next book. I did really love the author’s writing style and her imagination. In many ways this book was very unique.
Characters Talor didn’t have an easy time. A mother dying and a father that kind of had a psychotic issue and burned his house down can’t be easy on any daughter. I have to say for everything she is going through, she keeps is together pretty well. Life is as normal as it can be. I think I would’ve liked to know more about what she was doing before everything happened. She stopped singing after her mother died, but we don’t really know what her dreams are. There were many moments she annoyed me though. It was all too much and everything was about her. Instead of fighting back she seemed to give up a lot. Even near the end she was back and forth. I don’t know why, but I couldn’t completely connect with her.
Sage was really quiet and just kind of there in the beginning of the book. The mysterious guy. He seemed harmless though and interested in Talor. I was hoping that they would get together. While being mysterious, I think he should’ve been honest a lot sooner. Saying he came there just to see her does seem kind of creepy. I would’ve liked to have learned more about him. I think it would’ve helped if we had chapters from his POV. I think many things that confused me wouldn’t have if there was more about Sage.
Azalea and Spencer seemed like really interesting characters and I wish we knew more about them. They played their own role in the book, but weren’t seen very often. Same as her grandmother. I think she had so much more to tell than we now got to read. She seems like a strong lady who knows and has seen a lot.

AUTHOR BIO:
Safari Spell is a native of Albany, Georgia. She has a BA in Journalism from Valdosta State University. She currently lives in North Georgia with her husband, hilarious daughter, and a backyard jungle harboring all the dinosaurs everyone thinks are extinct. Her dreams include chasing autumn around the globe, owning a wallaby, and riding a camel for at least nine seconds.

Author links:
https://www.facebook.com/safarispellauthor/
https://twitter.com/safarispell
https://www.goodreads.com/author/show/15299661.Safari_Spell
As I said I am a part of the blog tour, if you want to see the other spots click here. The schedule for the tour has a link to all the participants.

While I do have my fair share of things that bugged me, I did enjoy my reading experience. Definitely enough so that I want to read the second book. I saw that it’s already out. Maybe something to put on my list for the near future.