October and of course Halloween is the perfect time to read some scary, creepy books. That’s why I decided to pick up There’s Someone Inside Your House by Stephanie Perkins. This book has been described as Scream meets YA and was a highly anticipated release for a ton of people, including me. Curious to read what I thought? Keep on reading! 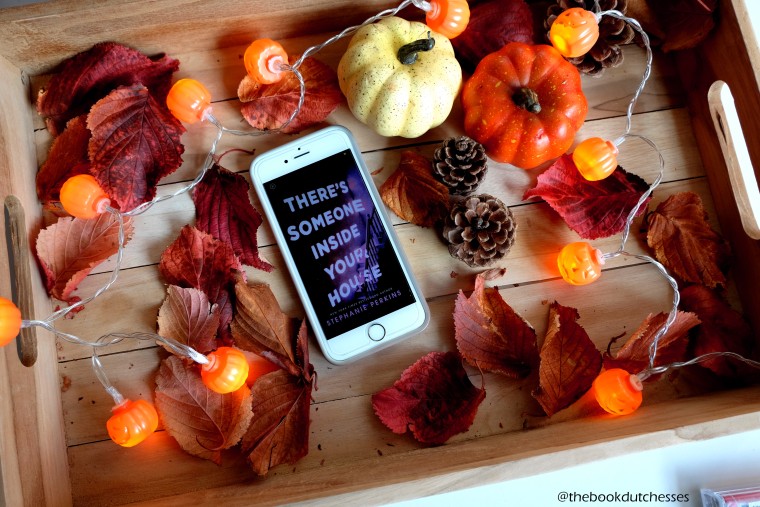 First off, what a stunning cover this book has! It’s quite simple but it works so well. I love the pink and the letters. It also conveys the story within quite well. You get a bit of a creepy feeling but at the same time the pink shows a softer, cuter side. This should’ve been my first clue that the book it way heavier on the romance than I expected upfront.

There’s Someone Inside Your House is about Osborne, Nebraska. Multiple teens from Osborne High get killed in a gruesome manner and as the blurb says ‘the dark secrets among them must finally be confronted’.  As I mentioned above there was a lot more romance than I was expecting. Half way through the book there were two teens killed and the rest of the time I was reading about Makani and Ollie and their budding romance. When I’m reading a slasher type of novel I expect more killing than kissing (that’s also how I like my books in general). I guess it could be kind of expected from the author of the Anna and the French Kiss trilogy. I’ve only read the first book in that trilogy but it was very cute and all about the romance. I feel like writing a romance is what Stephanie Perkins is good at and in my opinion that’s probably also what she should keep doing.

For a thriller, creepy kind of read there were some things that annoyed me while reading the book. Most of the book is written from Makani’s POV and whenever you do read from someone elses POV you know almost certainly that that person is going to get killed next. I would’ve liked it if the whole book had more POV that kept coming back, this way you care more about the characters that get killed, it’s not so obvious who’ll get killed and there’s less time for the romance (win-win-win in my opinion). I was dissapointed that the killer was revealed relatively early in the book. This took away a lot of the suspense for me. If the killer also had his/her own POV then the book would be a lot more interesting and scary I believe. I didn’t completely buy the motive behind the killings. However I was definitely creeped out by the killers MO and I thought that was really well done. Especially considering this is a YA novel and most people reading it might not be used to very scary books. I was dissapointed in Makani’s secret that was mentioned all the time and turned out to be a way less big of a deal than what I was imagining myself. I thought this was brought up way to much. Same with the romance, it was just too much and not the reason I wanted to read this book. It was however a super quick read and I finished it in a day. It isn’t that long and the writingstyle is very nice. The book just reads super easy and I flew through it. 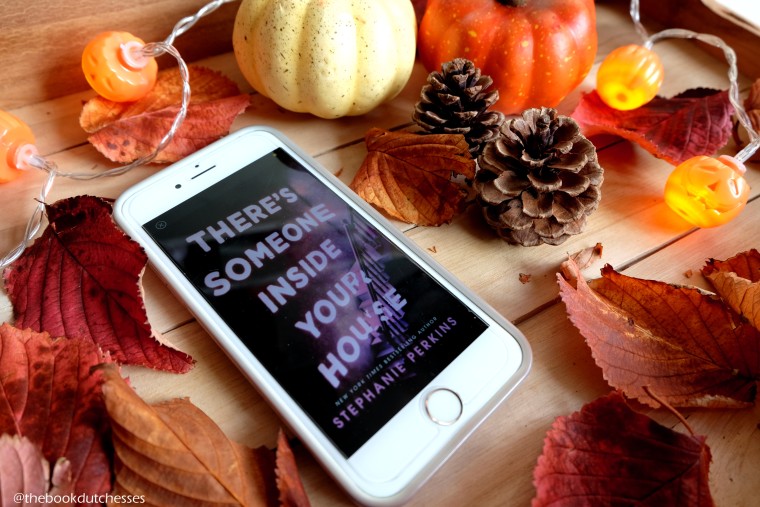 So Makani is our main character and I thought she was annoying as hell… I did like that she was African American – Native Hawaiian, that’s definitely different from our usual white MC’s and I really liked that. There’s a pretty diverse bunch of characters, which is obviously great. For one, there’s a transexual character, however I would’ve liked to read it bit more about this character. He’s one of the main characters best friends but you don’t read that much about him and even less about his transexuality. I’m not sure how I feel about that, I guess it’s nice that his character just was like that without that really being the story but I still would’ve liked to get it bit more from it. It did feel a bit like he was trans just to have a more diverse cast. So back to Makani, I did not like her at all. I understood her a bit more when learning more about her parents but it didn’t make me like her or get less annoyed by her. Like I mentioned before this book is quite heavy on the romance and Makani is just kind of obsessed with Ollie from the start. Her classmates are dying but up until halfway I didn’t get the feeling it was bothering her too much. She was just focussed on Ollie and on her own secret not coming out. A secret that when revealed was really not that big of a deal, especially considering there was a serial killer on the loose… The last thing that bothered me a lot was Makani thinking about things Ollie did or say in a way where it sounded a bit insulting before her thinking, ‘but I actually liked it a lot, surprisingly’ like she was better than him or something. All in all I simply didn’t care for Makani at all.

Ollie is the love interest in this book and he’s described a bit different from most love interests. I actually liked him a LOT better than I did Makani. Maybe it was simply because he was not her and that alone made him a more likeable character haha. No I’m just kidding, he was a very kind hearted character and he actually made my heart melt a couple of times. Same with his brother and Makani’s grandma. Those are two side characters I really liked! Makani’s two best friends were less developed to me and didn’t really make me feel much of anything. Neither did the characters that got killed, even though you got one chapter in their POV. I did enjoy reading those chapters but I simply would’ve like more of them to actually care about the characters. I feel like the last victim of the killer should’ve made you feel a lot more but I wasn’t even sure that person was dead at first and it was completely glossed over so once again I didn’t really care. I guess that was kinda the theme for me in this book haha.

So in the end I decided on three out of five stars for this book. While the main character was super annoying, most characters didn’t get to make me feel anything and the killer was revealed way to soon I did enjoy the story, it read super quick, it did give me a creepy feeling and has a great cover. Did you read this book yet? And what did you think of it?

Update: since putting up this review I changed my rating over at Goodreads to 2 stars so I decided to change it here as well. The quick read and stunning cover just couldn’t make up for the fact that the story itself was so disappointing. Do you ever change your rating after a while? Let me know in the comments!